The ravers had Ultra, the shopaholics have the Great Singapore Sale, beer guzzlers – Beerfest Asia 2017 is made for you. Beerfest Asia 2017 is back this year, bigger and better. From 17 – 20 August 2017, Asia’s largest beer convention will take place at Marina Bay Cruise Centre. With over 500 varieties of beer, a great lineup of live music, beer yoga, and free flow beer from just $15/h, this event will make your beer belly absolutely worth it! Here’s the lowdown on what’s going to be at Beerfest Asia this year!

1. Be spoilt silly by beer

This partially air-conditioned (yay!) location will feature over 500 varieties of beer with over a 100 beer labels making their debut this year. Look forward to Krušovice Imperial, Erdinger Sommerweis, Pressure Drop Wu Gang Chops The Tree, and Guinness Bright, as well as local brews by Archipelago Brewery, The 1925 Brewing Co., Brewlander & Co and more.

Hold on tight to your pint as you rock and groove to this year’s lineup of over 30 live acts! Prepare to rock out to the live performances of tribute bands of Guns N’ Roses, Def Leppard and Bon Jovi, local favourites, Reverie Acoustic, The Day Trippers, SweatShop Jam, and Supersonic, and party to the hits of Singapore’s finest DJs. Through the four days, Brendon P, Haan, KFC, Shigeki, Stephen Day, Zig Zach, Altra Mgmt and Deadbeat will be spinning their tracks to keep us entertained for the night! Curated by Timbre Group, the festival’s stage will also serve as a platform for budding local musicians to shine with their original compositions.

If you’re looking a laugh, there will be stand-up comedy in the entertainment menu too!

Yes, you read it right. Beer Yoga exists and it is coming to Singapore! Look forward to Singapore’s largest outdoor Beer Yoga session, led by chief instructor Dawn Sim from Trium Fitness. Indulge in the novel experience of incorporate the booze and the bottle with yoga poses, as well as the pleasures of beer drinking.

Worried about the munchies? Food Handle Bar, Kontiki, The 1925 Brewing Co., and Little Part 1 Café will be setting up food stalls to satisfy your hunger pangs! If you’re the bar food kinda drinker, The Golden Duck Co, known for their Salted Egg Yolk Snacks are onboard as this year’s Official Chips of Beerfest Asia 2017.

Making its first debut this year, are daily beer workshops held across the four days with different beer masters and brand ambassadors. Not only will beer lovers be guided on the various nuances of different types of brews, you might just learn how to brew your very own pint at home.

We’ve done the math for you too – When you become a VIP with our Hapz Exclusive Promotion, you can get FREE FLOW beer from $15/h! You can literally drink till you drop.

You’ll wanna give all your friends a call with our Hapz group deal – You can save up to 40% when you get a minimum of 4 Standard/VIP tickets! After all, hangouts are best with beer.

With the endless variety of beer available, you’re in for a beer wonderland sort of weekend! 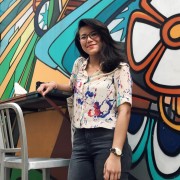 Krista is a lover of melancholic music and vintage knickknacks. For leisure, she does modern calligraphy and gets stuck in the beauty realm of Youtube.

Top Beers to Look Out for at Beerfest Asia 2017

The Best Surprises for Father’s Day!

8 Places to Bring your Kids to this June Holidays!

What You Missed at FitnessFest 2017!

Top Beers to Look Out for at Beerfest Asia 2017